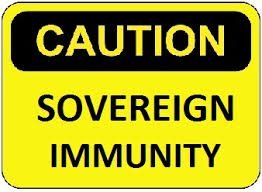 As Citizens of Georgia, you may be surprised to learn that, according to exceedingly broad court interpretations of the Georgia Tort Claims Act (GTCA), you have no recourse against state officials who sexually assault you, sexually harass you, slam your head into a door, or even file your teeth down to nubs.

You citizens of Georgia are also likely unaware that state agencies and officials are immune from suit for gross negligence that results in your rape or murder, under an exception to the GTCA that immunizes state officials against assault and battery claims—under any and all circumstances.

The Georgia Attorney General, who defends the State in these actions, and the courts, in their zealous expansion of the GTCA, have even erased a provision of the Georgia Constitution that holds state officials liable if they act with malicious intent to harm you. It does not matter if the state official violates other laws or rules governing his conduct on the job—even if the state official is committing criminal acts. In fact, courts have held state inspectors immune for taking bribes to falsify inspections, and state budget officials immune for stealing funds and cooking the books to hide the theft. In each case, the Attorney General asserted immunity and the courts agreed.

Here are twelve of the most egregious applications of sovereign immunity in order to protect state officials from any accountability to you as a citizen. We expect you will be shocked at the reprehensible and unacceptable conduct state officials can get away with in Georgia:

1. Davis v. Standifer, 621 S.E.2d 852, 275 Ga.App. 769 (Ga. App., 2005) A Georgia woman filed suit claiming a Georgia State Trooper put his hand up her dress against her will and inserted his fingers into her vagina. The Georgia Court of Appeals held the state trooper to be immune from the suit, even if the woman’s allegations were true, because the molestation occurred during a traffic stop, and therefore was committed in the course of the trooper performing his official duties.

2. Ferrell v. Young, 746 S.E.2d 167, 323 Ga.App. 338 (Ga. App., 2013) The court held a state police officer immune for fondling the genitals of the arrested suspect under the assault and battery exception to the GTCA— because the officer was acting in the scope of his state employment.

3. Ridley v. Johns, 552 S.E.2d 853, 274 Ga. 241 (Ga., 2001)
In this case involving a state office supervisor’s sexual harassment of a subordinate, a unanimous Georgia Supreme Court held the state official immune under the GTCA for, again, performing his official duties. “Since there is no exemption in the [GTCA] for acts motivated by malice or an intent to injure, the presence of such motivation has no effect on the immunity granted by the statute.”

4. Southerland v. Georgia Dept. of Corrections, 666 S.E.2d 383, 293 Ga.App. 56 (Ga. App., 2008)
In this case prison officials broke state law and the Georgia Dept of Corrections’ own rules by placing Southerland, a mentally retarded inmate, in the general population—in a cell with another inmate who had threatened to harm Southerland, and who did, in fact, beat Southerland to death. The Georgia Court of Appeals held “the actions of the prison employees in failing to follow standard operating procedures and state laws regarding the proper housing and medical care of inmates immunized by the assault and battery exception” to the GTCA. In other words, their gross negligence in placing Southerland in danger was immunized by his actual murder.

5. Pelham v. Bd. of Regents of the Univ. Sys. of Ga., 321 Ga.App. 791, 743 S.E.2d 469 (Ga. App., 2013)
According to the undisputed facts, a Georgia Southern football player was seriously and permanently injured when the head football coach ordered another player to attack the victim in a no-rules, no-holds-barred fistfight (on penalty of being cut from the team if the assailant did not comply). Relying on precedents such as the state trooper sexual assault case, the court used the assault by a third party as grounds to immunize the coach, both for negligence and malicious intent to harm, as well as to immunize the Board of Regents for negligent failure to properly train and supervise the coach.

6. Lockhart v. Bd. of Regents of the Univ. Sys. of Ga., 316 Ga.App. 759, 730 S.E.2d 475, 12 FCDR 2389 (Ga. App., 2012)
A patient sought treatment for her upper teeth at Medical College of Georgia Dental School, only to look in the mirror afterwards and see that the doctor had drilled her formerly healthy lower teeth down to nubs. The patient’s negligence claim for breach of the standard of medical care was re-construed by the court as a “technical battery” and dismissed on summary judgment under the assault and battery exception of the GTCA.

7. Tootle v Cartee, 634 SE2d 90, 92, 280 Ga. App. 428, 429 (Ga. App. 2006)
Though Southeastern Technical College rules bar public disclosure of the reason for dismissing an employee, the case for violating that policy was dismissed on the grounds that even state officials breaking state rules were acting in their official capacities. Thus the court held that even illegal and unauthorized acts were immunized as performance of official duties, and that that the GTCA immunized defamation even if performed with actual malice and intent to cause injury

8. Sommers Oil Co. v. Georgia Dep’t of Agriculture, 305 Ga.App. 330, 699 S.E.2d 537 (Ga. App., 2010)
A Georgia Department of Agriculture (“DOA”) inspector colluded with gas stations on I-95 to allow them to falsely calibrate their pumps so that customers received less gas than they paid for. The DOA was held to be immune for these criminal actions of its inspector, under the GTCA exception for licensing and inspection functions. Thus a provision that is supposed to allow the state to perform this function to the best of its ability, free from liability, in reality authorized a conspiracy by state employees to intentionally subvert the state’s licensing and inspection functions—and no citizen of Georgia harmed by the criminal conspiracy had any recourse.

9. Mattox v. Bailey, 472 S.E.2d 130, 131 221 Ga.App. 546 (Ga. App., 1996)
A prison inmate claimed a corrections officer slammed his head into a door and then continued to beat him while escorting him across the prison grounds. The court dismissed the claim holding that, regardless of the extent of the injuries or the motive for the beating, the officer was immune under the GTCA exception for battery. In fact, by the logic of subsequent assault and battery exception cases citing this precedent, the officer would be immune if he killed the inmate out of pure premeditated malice.
.
10. Georgia Military College v. Santamorena, 514 S.E.2d 82, 237 Ga.App. 58 (Ga. App., 1999)
The College was immune for negligence despite the absence of any security precautions in the housing for its two female students at the time, because the rape of one of the two females in her room by another student fell under the GTCA assault and battery exception. According to the logic of the opinions, the State would be immune if the College Dean raped the student.

11. Department of Human Resources v. Hutchinson, 456 S.E.2d 642, 217 Ga.App. 70 (Ga. App., 1995)
The State was not liable for negligence in placing a known violent juvenile in Hutchinson’s foster care, after the juvenile in her foster care shot Hutchinson, because the shooting fell under the GTCA assault and battery exception to waiver of sovereign immunity.

12. Department of Human Resources v. Coley, 544 S.E.2d 165, 247 Ga.App. 392 (Ga. App., 2000)
A patient at Central State Hospital was strangled to death after he was placed in a room with another patient who had threatened to kill someone in order to get a transfer to a different building for the criminally insane. The court found that the “loss” was caused, not by the state’s negligence, but by the assault [by a third party] for which state is immune. Quoting the Court of Appeals legal logic: It cannot be disputed that, when a plaintiff is injured by an assault or battery, his loss “results” from such assault or battery, even though there may have been other contributing factors. And the statute clearly provides that the state shall have no liability for the “loss.”

Here are an additional two ongoing cases that are only now reaching the appeals courts after being dismissed by the trial court on grounds of sovereign immunity:

Tricoli v. Watts. According to the DeKalb Superior Court, state budget officials are immune for stealing up to $18.5 million in state funds, keeping a false set of books to hide the theft, and knowingly falsifying official reports to state agencies—since such actions fall within their “financial oversight” responsibilities.

Benedek v. Adams. According to the Fulton State Court, University System officials and the Attorney General are immune for concealing evidence in their possession, committing perjury, improperly influencing witnesses to commit perjury, and manufacturing false evidence by way of criminal identity fraud, mail fraud, wire fraud, and computer fraud–in an attempt to revoke a professor’s tenure on charges the USG and Attorney General knew to be false—and then using the power of the Attorney General’s office to obstruct an investigation into their documented criminal conduct.