A Field of Pipe dreams: Build it in Macon and they won’t come 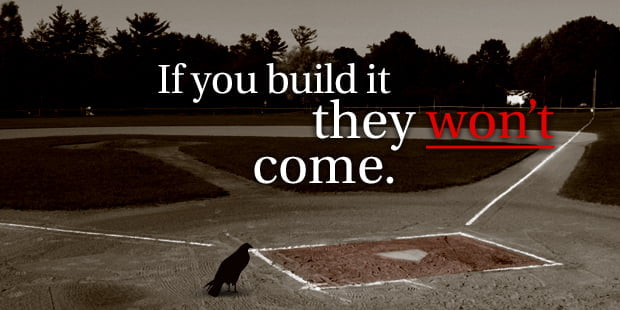 The famous line from the movie the Field of Dreams was “If you build it they will come!” That’s a great line from a movie, but the reality is when it comes to sports in Macon, Georgia they won’t come. On October 6, 2015  the Bibb county commission will be voting on a $50,000 feasibility study, which will need the support from at least five of the nine commissioners to pass.

According to the Macon Telegraph

The resolution, sponsored by Mayor Robert Reichert, would call for the firm Brailsford & Dunlavey to analyze the financial impact of baseball in Macon-Bibb over a 20-year period. The Washington, D.C.-based company that’s been involved in 50-plus ballpark projects also would help determine public and private funding methods.

Does the Mayor and the commissioners really need to waste $50,000 of our tax money to discover something so blatantly obvious? A new baseball park in Macon is a complete waste of money especially with so many far more pressing improvements needed.

All the teams in the past have failed and so would this one. There simply isn’t enough interest in minor league baseball as there was in past decades when your entertainment choices were more limited. Today the options for entertainment are simply more varied. In fact there isn’t enough interest in hockey, basketball, or even football. Mercer has a very good baseball and football program now and that is the local team we should be supporting. If you want to watch a good baseball or football game then head over to Mercer!

People under 40 are far more likely to look forward to a Netflix binge watching of “Orange is the New Black” than they are to go see a minor league baseball team. In fact giant HDTV’s in our homes have seen the number of people attending concerts, sports events, and movies decline precipitously in recent years. In past decades when you had a fuzzy and small TV, you were a lot more willing to put up with the crowds, the expense, and all the other annoyances to go to a baseball game. But when you have a 65″ HDTV with surround sound and the ability to pause and watch it from your sofa that has created a lot more homebodies unwilling to leave the comfort of their homes.

I am also concerned why they feel the need to spend $50,000 on a new study when we already have past studies not to mention local people who would be able to gather the same information for far less. Don’t we already send enough of our money to D.C. as it is without making some Washington based firm $50,000 richer for something that is so obvious? What’s next, hiring a Seattle based firm to determine if water is wet?

The success story of the new baseball  stadium in Greenville, SC cannot be compared to Macon for a variety of reasons. Greenville metropolitan area has a MSA population of 850,965 which is far larger than middle Georgia even if you include all surrounding counties. Greenville is also ranked among the 10 fastest growing cities in the U.S. with a lot of people with expendable incomes looking for a variety of entertainment. Macon is also only a short drive from Atlanta for those wanting to watch a professional baseball game unlike Greenville where you would have a much longer drive.

The mixed-use stadium in Greenville is successful because it sits in a vibrant and thriving downtown and is surrounded by condominiums, office, retail, and entertainment. It is in a growing city not one like Macon that is losing people. They also had the leverage to demand that a team would have to help pay for the stadium to use it. Macon would have no such leverage.

What angers me more than anything is that the vote by the commission tomorrow to flush another $50,000 of our tax money down the toilet (yet again) on another foolish pipe dream is supposed to be a close vote at all. If Scotty Shepherd, Gary Bechtel, Larry Schlesinger, and Mallory Jones vote yes on this foolish waste of money the voters in their districts need to make sure and remember that at the next election. They obviously don’t care about throwing our money away.

Every commissioner with any brains or a lick of common sense should vote not only no, but a resounding Hell No! Bibb county has far more pressing concerns than wasting money on a stadium that will undoubtedly fail to stay afloat. Didn’t all those museum boondoggles teach you anything? How about the pie in the sky drone proposal?

Focus on recycling, the landfills, blight, converting more vacant buildings downtown into condos, crime, cleaning up all the litter that you see on our streets which includes a lot of political signage, and so many other problems which would help make Macon more livable. There are a 1,001 other priorities Macon-Bibb County commissioners need to focus on before we consider a new failed sports foray.

One thought on “A Field of Pipe dreams: Build it in Macon and they won’t come”